Richard Evans writes his experiences with fitting his bifold doors

When we first saw our house in 2015 we knew immediately that there were two projects that, if we bought it, we just had to get done. The house is built onto a south facing hill and, from the front, looks to be a conventional two stories, 3 or 4 beds. However, from the back its three stories high as the garden is a level below the entry floor. The design of the house exploited this by having an open balcony at the mid-floor, accessed both from the lounge and dining room by "old style" sliding aluminium double-glazed doors. A previous owner had then turned this balcony into a conservatory but had retained the old doors. Downstairs a similar set of 6ft aluminium sliding double-glazed doors led from the family room to the garden. We knew we wanted to open this wall up as much as possible to "let the garden in" and turn it into our summer lounge. Upstairs the sliding doors were both an obstacle to enjoying the outlook from the mid-floor and also a trip hazard due to a difference in floor height. 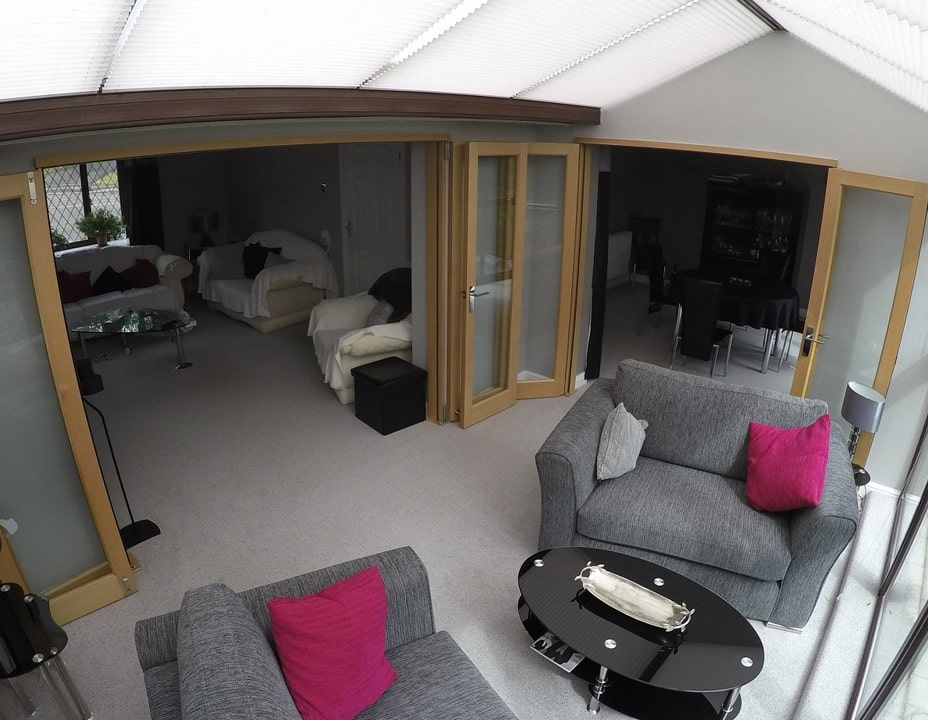 We completed the purchase of the house in September 2015 and set about some other much needed refurbishments. After spending a bit of time researching possible solutions, visiting Vufold's showroom and stand at the NEC Grand Designs Live exhibition, we chose the Inspire internal bifold door sets for the conservatory and the Ultra triple-glazed bifold doors for the family room.

Project 1: Inspire Internal Room Dividers - 6ft and 8ft. Completed March 2016 The space in the conservatory had originally been outside, therefore the walls were brick and the floor level a few inches above that in the mid-floor lounge and dining room. The doors would only slide behind one another so the openings were always restricted. What we wanted to do was lower the conservatory floor and open up the space so we could treat it as fully open-plan space when required, have it just extend the lounge or dining room, or close off the conservatory altogether on those cold winter nights.

What we liked about the Inspire doorset was the way the doors could fold flat to the walls and have no need for a floor mounted track or other central fixings that would interfere with movement. We think the replacement of the old doors with the two Inspire doorsets is a huge improvement to the space and we were really impressed by the quality of the doors and the ease of fitting. For this project we fitted the two doorsets ourselves over a couple of weekends.

Richard’s tips: 1) The Inspire doorset is designed to fit securely to the floor, with the bottom pivot carrying all of the weight. Whilst this works fine for tiled or hardwood floors, in our case we had a continuous run of carpet... which caused something of a dilemma. Our solution was to fashion some standoffs out of cut-off pieces of engineered oak floor planks which happened to be exactly the right thickness for the carpet and underlay. We screwed these to the floor, set the frame jambs and bottom pivots onto the standoffs, and had the carpet fitted around. We think it's a neat result and matches the frame very well. (See below). 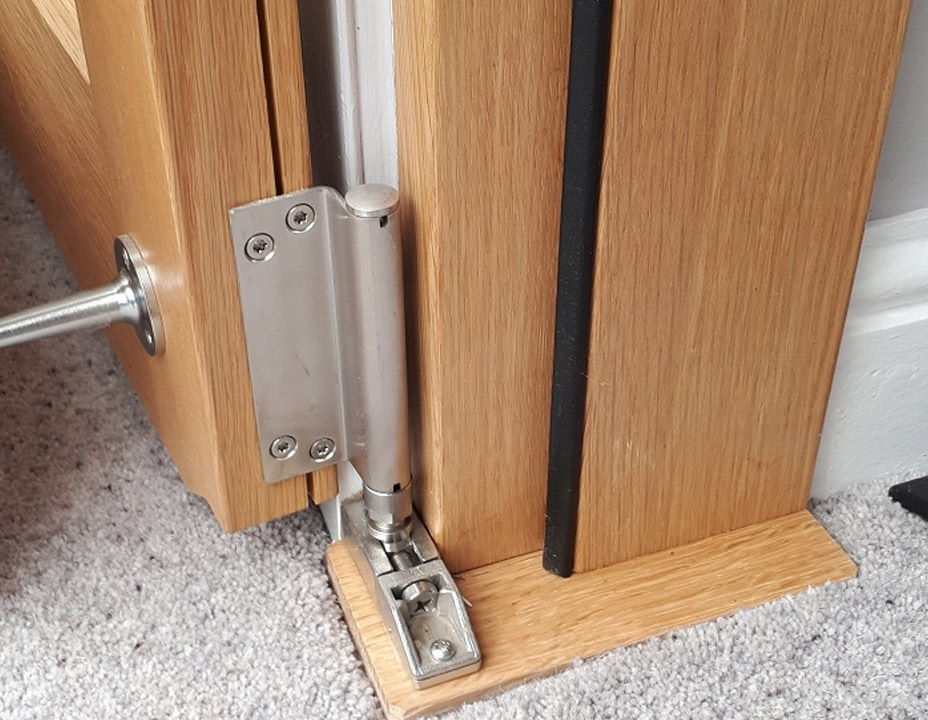 2) We didn't fancy drilling frame fixings through those nice oak jambs and the frame head as, due to these walls being cavity walls, the only positions we could fix would have been visible at all times. Even with the supplied blanking covers, we thought this would detract from the appearance. Our solution was to use Soudal Soudafoam window and door installation foam to set the doors into the opening. We used some timber and strapping to brace the doors square and level, along with packing and wedges to hold them in place, we then sprayed foam round both sides and the top. As additional security, we then screwed diagonally (and invisibly) through the frame jamb, standoff and into the floor and also through the jamb, frame head and into the timber lintel. The foam is definitely strong enough for this type of internal door frame and had the additional benefit of allowing us to cut out and refit one of the frames when we realised it hadn't gone in quite straight.

3) Drill a pilot hole and use a screw wax or lubricant when screwing down the bottom pivot into something like a hardwood floor. We sheared the heads off a couple of the stainless screws before learning this trick.

Project 2: Ultra, Grey Aluminium/Oak - 4.2m Triple-glazed Bifold doors with additional blinds - Completed July 2017. As was the case upstairs, the old 6ft aluminium sliding doors only open by sliding one behind the other leaving a restricted opening and parts of the room quite dark. What we wanted was to open as much of the wall as possible to let light and air in during the summer and yet keep the room warm and bright in the winter. After consulting a structural engineer to advise on the design of the RSJ beam, we knew we could go for a 4.2m doorset which was the largest size that would fit the room dimensions. We selected the triple-glazed Ultra doorset because of its thermal rating, the quality of the build and the 5 panel door arrangement (at 4.2m) that would allow all of the doors to stack to one side. Due to the scale of this work we engaged a local builder to take down the wall, supply the RSJ and fit the doorset.

Completed in just over a week, we think these doors have transformed our rather dark "family room" into a summer lounge filled with light and air. When fully open the garden comes right into the house but we also like the fact that we can open them halfway as it begins to get a bit colder as the summer progresses. 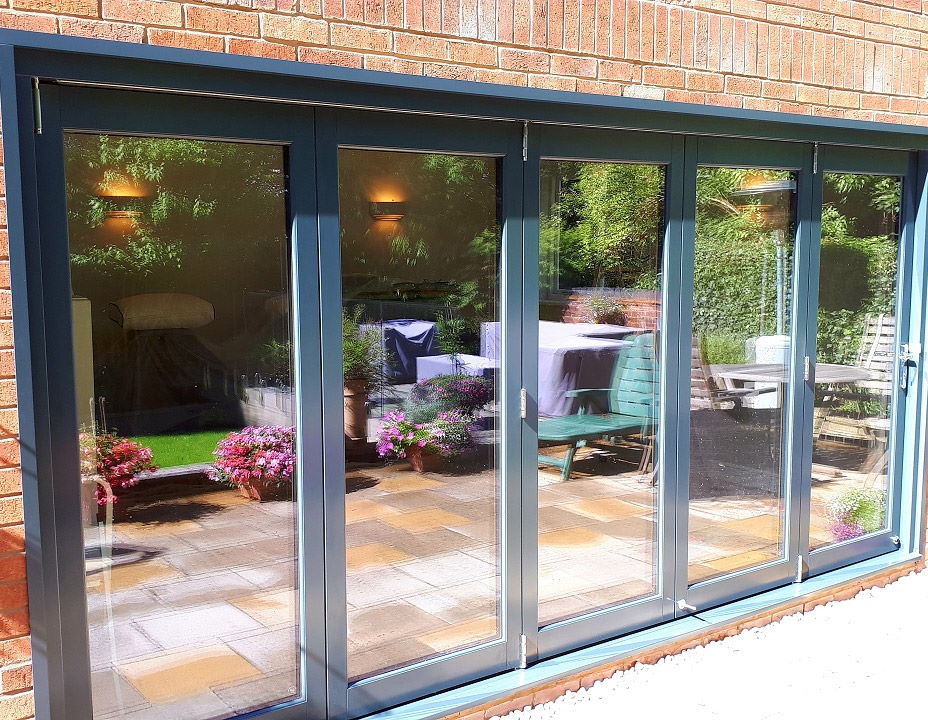 Our tips: 1) Though it's rather stating the obvious, thoroughly read and follow the instructions. If having a builder do the work, make sure from the outset that they know you will be checking everything they do. In particular, make absolutely sure that the wall opening dimensions are correct, all frame fixings are used and the correct screws are used for each of the components. We could go into a list of things that had not been done according to the instructions, which in our case almost led to a complete disaster!

2) Drill a pilot hole and use a screw wax or lubricant when screwing down the bottom pivot into the cill. Our fitter sheared the head off one of the stainless screws, and so we might also recommend putting these screws in by hand rather than using a power tool. 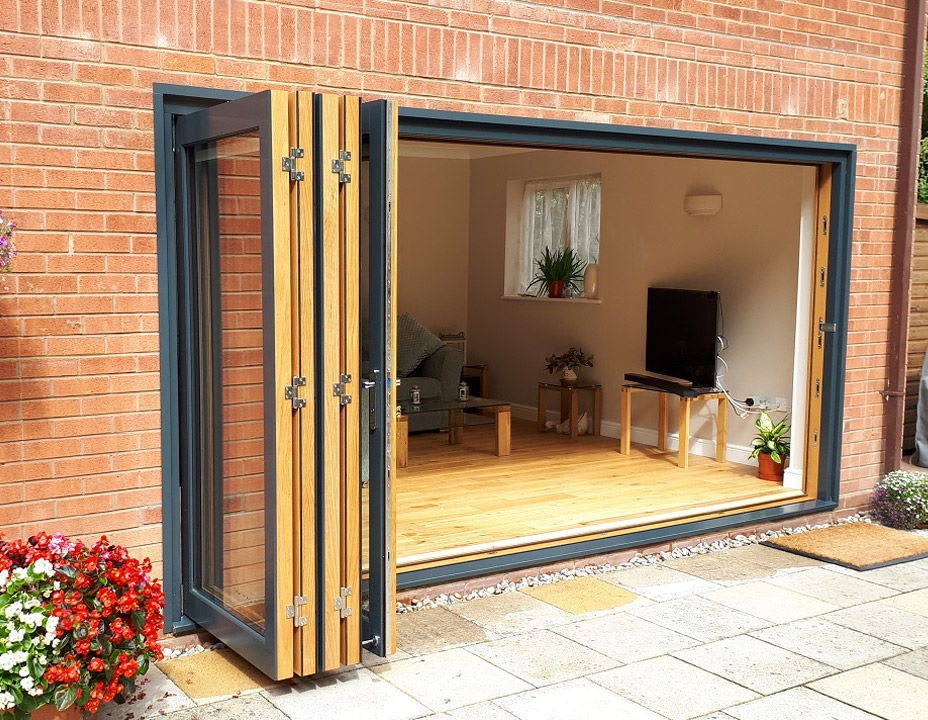 3) In the event of making the wall opening a bit too big (!!), all may not be lost. Though our solution may not be something that everyone can do, they may be able to find someone to help. We needed to close a somewhat irregular gap which, instead of being the recommended 5mm on either side of the door frame, varied from 10mm to almost 25mm in places. A very major problem. Our solution was to find a local company who could supply some 1 1/2" aluminium angle section pieces. We had these machined in a few places, such as to clear the cill blanking plates and then found another local company who powder coated to the exact colour of the door cladding. We then used the same coloured silicone to fit these new trim pieces to the wall. Somewhat surprisingly we now think that the finished trim actually enhances the doors.