As Vufold customers go, Paul Rixon is one of our more unusual ones. Paul is a building contractor from Sidcup in Kent and over the years has fitted several Vufold bi-folding doors for his customers. 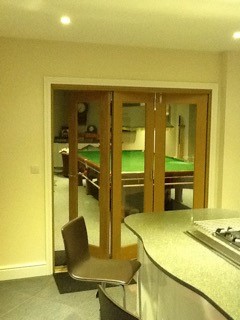 Four years ago, Paul and his wife Norma moved into a semi-detached house in Sidcup, which had undergone substantial renovation and extension work. As you might expect from a couple designing their new dream home, Paul had ideas of his own which included the building of a snooker room where he could indulge in his favoured game. However, when it came down to planning the layout, it was Paul’s designer that suggested bi-fold doors, as Paul explains.

“Originally, we were going to have a partition that separated the snooker room from the kitchen area, but then the designer said how good it would be to have glass doors that allowed the light to come through and I knew instantly where I needed to go next. I’d fitted a number of external Vufold doors before but had only recently fitted a set of Finesse internal Bifold doors just down the road from me, for a customer. I’ve always recommended Vufold to customers because of the quality, value for money and the easy to follow fitting instructions. The oak clad Finesse range looks really classy and is so easy to operate, which are just two more reasons we chose them,” says Paul.

Paul and Norma’s three-door set of Finesse internal Bifold doors do much more than allow the snooker games to be played in peace while the kitchen is in use. When they are folded back to the walls, an island area is created where the two rooms meet, which makes for a perfect place to socialise when the couple have family or friends round. 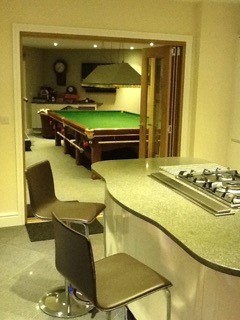 “The flexibility the doors provide, really is the key factor for us. We can have two separate rooms, three areas or one big space, all depending on how we want to use that part of our home. The Vufold doors really do offer so much more than other options, ” says Paul.