Over 30 years ago Bill Watt and his wife moved into, what was essentially, a cluster of barns in the delightful village of Broad Campden tucked away in The Cotswolds. Bill and his family converted building after building until they had a set of living spaces, workshops and utility rooms that were, in the main, connected to each other. 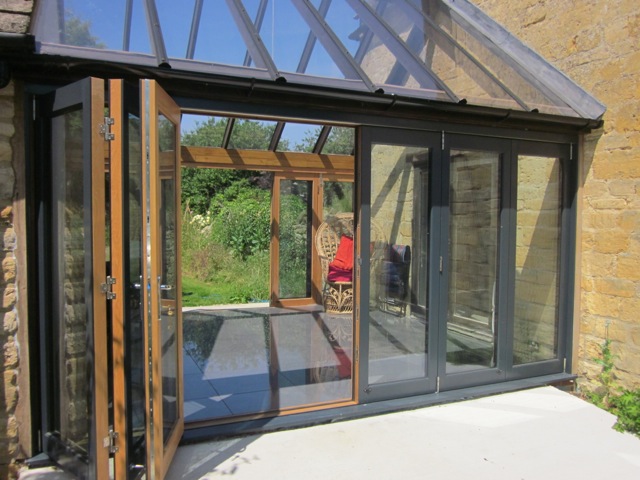 In 2012, with the children having fled the nest (after what Bill admits was a life of living on a building site) Bill set about the final project - to connect the house to his workshop.

"We had looked at the idea of having a conservatory built between the two buildings but we needed to make sure we had full access from the front of the grounds to the back where we have a half acre field that needs maintenance. Our motor mower is kept in a building accessed from the front of the property so we needed to be able to drive it through the existing space between the buildings that would in time be closed off. A conservatory would not let us do that, but the Vufold Ultra doors fold all the way back to the wall, which would result in no restrictions or hindrances. Not only can I drive the mower through with no problems; I've even driven a car from one side to the other when I needed to!" says Bill.

The two sets of 14 foot Ultra Bi-fold doors fitted the space almost perfectly with little alterations needed to the buildings. Bill designed the acrylic roof to fit above the doors and booked his builders, who it were very impressed with the quality of the doors. 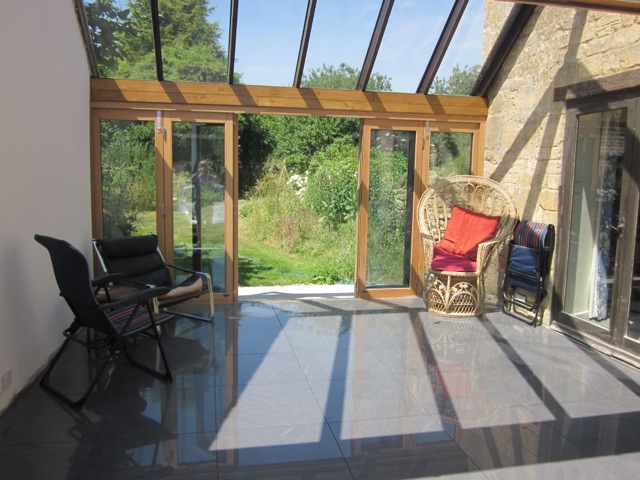 "When we looked at the doors on display at the NEC in Birmingham we were quite taken with the stainless steel hinges and roller bearings as they looked high quality. When our builder came round to fit the doors he too was impressed and referred to the running system as the “Rolls Royce” of fittings. The doors have been in place for two years now and have never given us any concerns. They run as smooth today as they did when fitted, look great and feel as smooth as new. When we saw the Ultra range we did like the quality and price but the fact that they were fit for purpose and looked built to last really sold it for us," says Bill.

The connecting atrium, with its triple glazed doors has brought added benefits that Bill had never considered before. 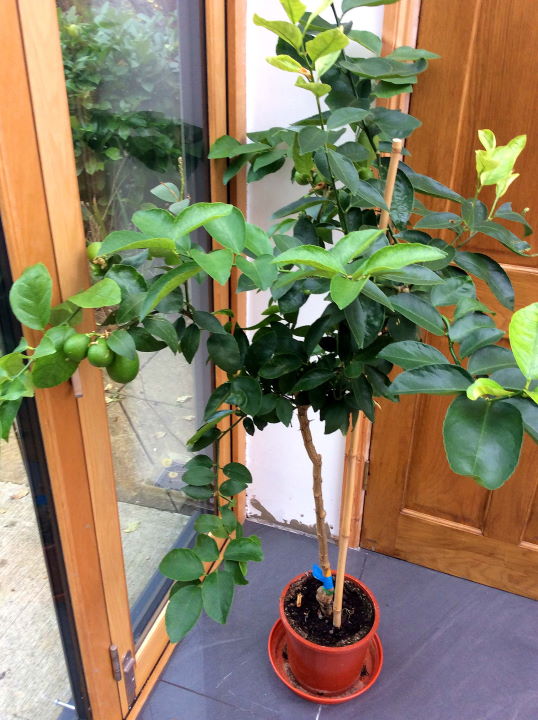 "Our aim was to create a covered connection between the two buildings without losing the utility of being able to go from one side of the property to the other. We have done that, but we now also have a new room that is warm in winter and a source of heat. When the atrium gets warmed up, we can open the doors to the workshop and living room and get free heat in all three spaces. It is so warm in there that we now have orange, lime, lemon and grapefruit trees all producing fruit. It's a fabulous space made all the special for using the Ultra range doors," says Bill.